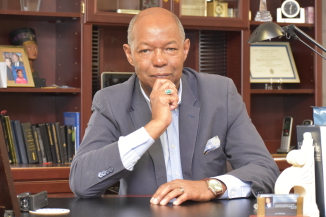 Dr. Vandy L. Miller, Chair of The Board of Elders

Colonel (Retired) Vandy L. Miller, Presiding Elder of Twelfth Street Christian Church, has been a member for over 50 Years. Elder Miller is a native of Bluefield West Virginia. He begin his Federal Service in the US Army in 1954 as a Second Lieutenant and a Distinguished Military Graduate from West Virginia State College (now University), in Institute, WV. He held many positions of increase Technical and Leadership responsibilities. After retiring from the Military in 1978, he then took a job with the U S Nuclear Regulatory Commission as a Branch Chief, retiring for a second time after eighteen with the Civil Service as a Senior Executive Five.

In addition to his full time work for the Federal Government, he has held leadership position in his Church, Fraternity and several Professional Scientific Organizations. He has served with undying dedication, unrelenting commitment and fervent devotion. Elder Miller is an outstanding American, a man of God, a devoted public servant and a family man.